Global Coherence Initiative: how everything is energetically interconnected

The Global Coherence Initiative (GCI) encompasses a wide variety of scientific data to provide new insights into the interconnectedness between our health, human and animal behavior, and the sun and the Earth’s magnetic activity. The scientific community is starting to understand what is happening energetically. The insights show how everything is energetically interconnected on a deeper level.

We increasingly understand how magnetic fields generated by the sun and the Earth affect human health and behavior – and why it is important to know this.

The idea that the magnetic radiation from the Earth, the sun, and other planets affect human health and behavior and, on a larger scale, can cause social unrest and major global events have been a conclusion among scientists for decades. It is still a matter of conjecture about exactly how this works. The study of this interconnectedness, which has not yet been fully embraced in the mainstream scientific community, is still in its infancy.

The global coherence research uses a multidisciplinary approach that encompasses geosciences and astrophysics and scientific knowledge from human and animal studies related to social and global events. The Global Coherence Initiative (GCI) uses the Global Coherence Monitoring System to collect a variety of data and information about the Earth’s magnetic field and how it interacts with human emotions and behaviors.

The Global Coherence Monitoring System (GCMS), the scientific component of GCI, uses state-of-the-art detection technology to detect changes in the geomagnetic field. Ultimately, there will be about a dozen sensor sites in GCMS’s global network of magnetometers. As of 2015, the following sensor locations were active day and night at the following locations:

These GCMS sensors continuously monitor the resonance frequencies in the Earth’s magnetic field. They track changes in geomagnetic activity caused by solar storms, changes in solar wind speed, disruption of the Schumann resonance (SR), and those of major global events (think 9/11, the covid outbreak) that have a strong emotional charge.

It is well known that the resonance frequencies in the different magnetic fields of the Earth directly overlap with those of the human brain (think of our brainwaves), the cardiovascular and autonomic nervous systems. It is a logical consequence that numerous physiological frequencies in humans and global collective behavior are synchronized with solar and geomagnetic activity and that disturbances from both sides can have adverse effects on human health and behavior. When the Earth’s magnetic field is disturbed, it can cause sleeping problems, mental confusion, sudden lack of energy, or other health issues.

The Global Coherence Monitoring System primarily investigates how these different energy fields influence human physiological, mental, and emotional processes, health, and collective behavior. Also, the researchers hope to discover patterns and connections between changes in the Earth’s magnetic field and natural disasters such as earthquakes, volcanic eruptions, and human events such as social unrest and terrorist attacks.

The research carried out by the GCI aims to find answers to the following scientific questions:

Based on the above hypotheses and the data they have obtained from their studies, the researchers have now concluded that human emotions and consciousness constantly interact with the Earth’s magnetic field and a feedback loop.

They suggest that this electromagnetic energy is communicated non-locally between humans at an unconscious level, effectively connecting all living systems together. This invisible network of consciousness and energy is also called “The Field” or “The Divine Matrix.”

These magnetic fields act as a kind of carrier waves for information, which can affect all living systems – positive or negative – within the field environment and our collective consciousness.

The Global Coherence Initiative is beginning to better understand how we are all interconnected at a deeper level and how we influence each other and how we are affected by the magnetic fields generated by the sun and the Earth. Every cell in our body baths in an external and internal environment of fluctuating invisible magnetic forces.

Human physiological rhythms and behaviors synchronize with solar and geomagnetic activity, so fluctuations in the Earth and sun’s magnetic fields can affect almost every circuit in human and biological systems. Logically, disruptions to this can adversely affect human health and behavior. Besides, changes in the intensity of geomagnetic activity and the Schumann resonance appear to alter brain waves and neurohormonal responses. Our brains are very sensitive electromagnetic organs and will, therefore, primarily respond to electromagnetic waves.

Changes in the Earth’s magnetic field show to affect human heart rhythms and changes in brain activity and nervous system. As a result, athletic performance, memory, and other thinking tasks can change under the geomagnetic field’s influence.

The synthesis of nutrients in plants and algae is also changing, as are the number of reported traffic violations and accidents, mortality from heart attacks and strokes, and the number of cases of depression and suicide.

The Earth and ionosphere together generate frequencies ranging from 0.01 hertz to 300 hertz. Some of those frequencies resonate with the Earth’s magnetic field, others with those of the human brain and autonomic nervous system. The researchers indicate that we may be more closely connected to the Earth’s field than we could ever have imagined.

From ancient times, many cultures have always believed that their collective behavior changed under the influence of the cosmos’ energy. This belief has proved true. The GCI studies show that increased violence, crime, social unrest, revolutions, and the frequency of terrorist attacks are linked.

The Earth and ionosphere together generate frequencies ranging from 0.01 hertz to 300 hertz. Some of those frequencies resonate with the Earth’s magnetic field, others with those of the human brain and autonomic nervous system. The researchers indicate that we may be more closely connected to the Earth’s field than we ever imagined.

From ancient times, many cultures have always believed that their collective behavior changed under the influence of the cosmos’ energy. This belief has proved true. The GCI studies show that increased violence, crime, social unrest, revolutions, and frequency of terrorist attacks can be linked to the solar cycle and the resulting disturbances in the Earth’s magnetic field.

Alexander Tchijevsky, a Russian scientist, provided the first scientific evidence for the links between electromagnetic field changes and social unrest. He noted that heavier battles took place during the peak periods of sunspots during World War I.

Tchijevsky then conducted an in-depth study of global human history dating back to 1749 and compared the occurrence of major events to solar cycles in the same period up to 1926. In the timeline below, you can see how sunspots and significant historical events do have a relationship. to have. The data of the survey is compiled based on events in 72 countries. 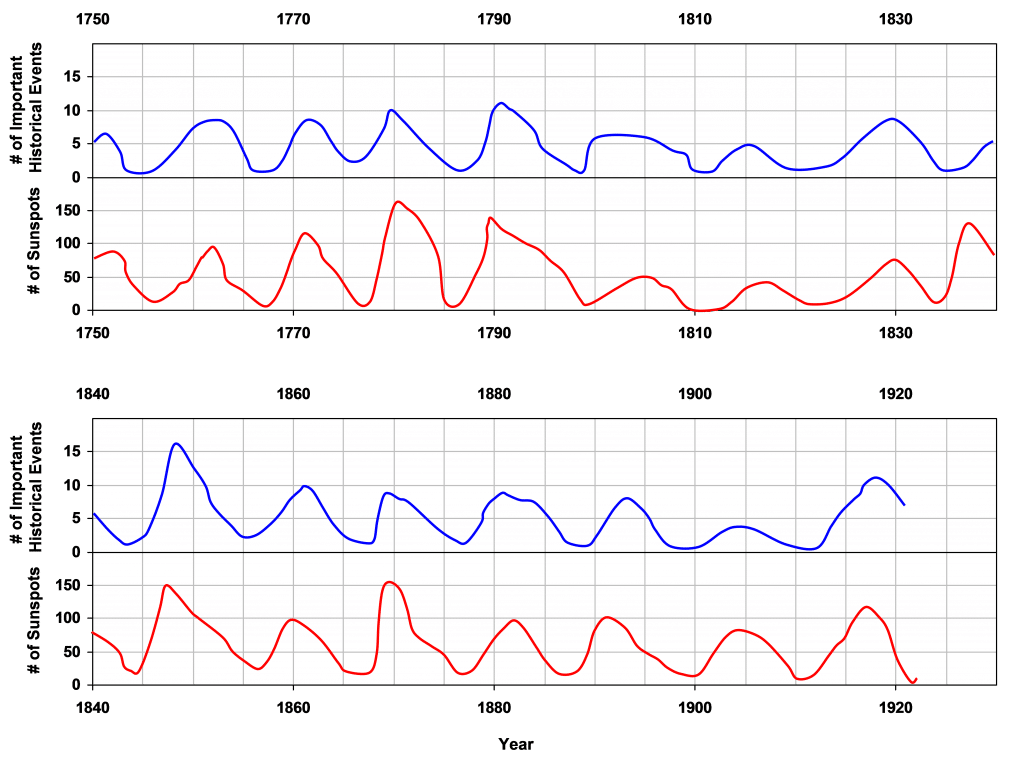 Earth’s magnetic field and the poles

Earth has a strong internal magnetic field that appears to be generated by the electric currents in the liquid outer iron core, which in turn is powered by internal heat sources. The Earth’s magnetic field is similar to that of a bar magnet or “dipole field,” with an axis tilted about 11.5 degrees from the rotation axis. This means that the magnetic poles are not the same as the geographic poles. The magnetic North Pole is located somewhere in the far north of the Canadian territory of Nunavut.

The scientist Carl Friedrich Gauss first measured the Earth’s magnetic field strength in 1835, and since then, the strength has decreased by about 10%. The locations of the magnetic poles also move up to 55 kilometers every year.

What is the Schumann Resonance?

Schumann resonances appear as separate peaks at extremely low frequencies from about 7.8 hertz, which is considered the fundamental frequency, also known as the Earth’s heartbeat. These electrical signals’ resonances can be observed around 7.8, 14, 20, 26, 33, 39, and 45 hertz.

Scientists discovered the similarity of the 7.8-hertz Earth resonance and the human brainwave patterns soon after they first measured the Schumann resonances. Numerous studies conducted by the Halberg Chronobiology Center at the University of Minnesota and other studies have since shown that there are important links between solar, Schumann, and geomagnetic field line resonances and a wide variety of health and wellness factors for humans and animal.

Do you want to listen to the resonances of the Earth? This three-minute audio file consists of data collected through the Global Coherence Initiative magnetic sensor in Boulder Creek, USA. The resonances have shifted in frequency to an audible range. They were recorded at night during a period of relatively quiet ionospheric activity.

The Global Coherence Initiative hypothesizes that changes in the resonance frequencies of the Earth and the ionosphere can affect the human autonomic nervous system’s function and the brain and cardiovascular systems. Until recently, it was not feasible to test this hypothesis scientifically. This is because there is a lack of reliable, continuous measurements of ionospheric and field line resonance data and the inability to perform long-term monitoring of people’s physiological systems, such as heart rate variability monitoring, which reflects autonomic nervous system activity.

All living systems connected through the Earth’s magnetic field

However, the knowledge gained about magnetic fields and their influence on the environment has also been confirmed in detail. The HeartMath Institute and the Global Coherence Initiative have shown in laboratory research that the electromagnetic field generated by a person’s heart can be detected by nearby animals or other people’s nervous systems.

For example, research conducted in HeartMath’s lab has also confirmed the hypothesis that when a person is in a state of heart coherence, the heart emits a more coherent electromagnetic signal to the environment. This research has further shown that we are more sensitive to detecting the information in the electromagnetic fields radiated by others when we are in this coherent state. Consider, for example, how you can feel that someone is not feeling well.